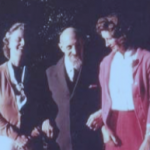 Magor, Assagioli and Eastcott
Assagioli was also active in the field of consciousness and transpersonal work. After having completed his studies Theosophy and Oriental Philosophy, he developed in his writings a variety of meditation techniques, including reflective, receptive and creative meditation. He also made contributions to various spiritual groups in the tradition known as the Ancient Wisdom.

Eventually Assagioli was therefore one of the first psychologists who recognized the spiritual nature of man, along with Abraham Maslow. His work became known as the psycho-synthesis, a more clinically applied form of psychotherapy in which the transpersonal aspects of human experience are embedded.

Michal J. Eastcott and Nancy Magor traveled constantly back and forth between Italy and England. They took care of the translations for Assagioli. They also gave guidance on two meditation groups at “Sundial House” in Kent. In this context it should also be mentioned Tilla Grenier, who represented this activity in Brussels and who translated all MGNA (Meditation Group for the New Age) booklets.

Michal worked and wrote from an open heart and an experienced mind and her work reflects Assagioli’s studies and the esotericism of Alice Bailey, who enriches the life of the personality with the wisdom and love of the divinity in every human soul.

The clearly written Sundial House books are recognised internationally as “bridging books”. They provide an easier introduction to the esoteric philosophy books written by Alice A. Bailey working with her Ageless Wisdom Teacher, The Tibetan, Master Djwhal Khul.

The immediate impact of some aspects of international news is apt to overwhelm and engulf us. The dilemmas facing humankind can be both depressing and distressing. This book seeks to bring hope and reassurance by encouraging us to consider the underlying causes that are shaping our affairs.