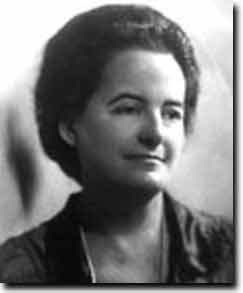 Alice Bailey, Alice Ann Bailey (Manchester June 16, 1880 – New York December 15, 1949) was a writer of more than twenty-four books on theosophical subjects, and was one of the first writers to use the term New Age. Bailey was born as Alice LaTrobe Bateman, in Manchester, England. She moved to the United States in 1907, where she spent most of her life as a writer and teacher. Bailey’s works, written between 1919 and 1949, describe a wide-ranging system of esoteric thought covering such topics as how spirituality relates to the solar system, meditation, healing, spiritual psychology, the destiny of nations, and prescriptions for society in general. She described the majority of her work as having been telepathically dictated to her by a Master of Wisdom, initially referred to only as “the Tibetan” or by the initials “D.K.,” later identified as Djwal Khul. Her writings were somewhat similar to those of Madame Blavatsky and are among the teachings often referred to as the “Ageless Wisdom.” Though Bailey’s writings differ in some respect to the Theosophy of Madame Blavatsky, they have much in common with it. She wrote on religious themes, including Christianity, though her writings are fundamentally different from many aspects of Christianity or other orthodox religions. Her vision of a unified society included a global “spirit of religion” different from traditional religious forms and including the concept of the Age of Aquarius.

Childhood and early life.
Bailey was born to a wealthy aristocratic British family and, as a member of the Anglican Church, received a thorough Christian education.

Her autobiography states that at age 15, on June 30, 1895, Bailey was visited by a stranger, “…a tall man, dressed in European clothes and wearing a turban” who told her she needed to develop self-control to prepare for certain work he planned for her to do.

At age 22, Bailey did evangelical work in connection with the YMCA and the British Army. This took her to India where, in 1907, she met her future husband Walter Evans. Together they moved to America where Evans became an Episcopalian priest. The marriage did not last and Bailey pushed for and received a divorce. She left with their three children after formal separation in 1915. Then followed a difficult period in which she worked in a sardine factory to support herself and the children.

With the Theosophical Society

Bailey discovered the Theosophical Society and the work of Helena Petrovna Blavatsky. The Theosophical Society states that Bailey became involved in 1917. Theosophist Joy Mills states that in 1918 she became a member of the Esoteric Section of the society. Theosophist Bruce F. Campbell notes, “She quickly rose to a position of influence in the American Section of the Adyar society, moving to its headquarters at Krotona in Hollywood. She became editor of its magazine, The Messenger, and member of the committee responsible for Krotona.”

The Theosophist published the first few chapters of her first work, Initiation, Human and Solar, (p. 762) but then stopped for reasons Bailey called “theosophical jealousy and reactionary attitude.” Bailey “objected to the ‘neo-Theosophy’ of Annie Besant” and worked with Foster Bailey to gain more power in the American Section. According to Theosophist Josephine Maria Davies Ransom, she became part of a progressive “Back to Blavatsky movement, led mainly by Mr. and Mrs. Foster Bailey”. She outlined her vision for the Esoteric Section of the Theosophical Society, however, her efforts to influence the society failed, and she and her husband were dismissed from their positions.

According to historian of religion Olav Hammer, Bailey’s early writings of communications with the Tibetan were well received within the society, but society president Annie Besant questioned Bailey’s claims of communications with “the Tibetan” and allowed the Baileys to be expelled from the organization. According to Bailey, she had come to see the society as authoritarian and involved with “lower psychic phenomena”.

Alice and Foster Bailey founded the Lucis Trust in 1922. It’s activities include the Arcane School, World Goodwill, Triangles, a quarterly magazine called The Beacon, and a publishing company primarily intended to publish Bailey’s many books. The Arcane School gives instruction and guidance in meditation, via correspondence, based on the ideas in Bailey’s books. World Goodwill is intended to promote better human relations through goodwill which they define as “love in action.” That “action” included support of the United Nations. The “Triangles” are groups of three people who agree to meditate as a unit on right human relations at the same time each day.

Alice and Foster Bailey founded, “Lucifer Publishing Company.” (“‘Lucifer’ and ‘Lucis’ come from the same word root, lucis being the Latin generative case meaning of light.” After the first two or three years, the name was changed to “Lucis Publishing Co.” (The Theosophical Society also used the name “Lucifer” for its early magazine.) In 1923, with the help of Foster Bailey, Alice Bailey founded the Arcane School, which is part of Lucis Trust. This school still provides educational correspondence, meditation instruction, and guided study based on her writings.